I wanted to write down my thoughts of how "The Dreamers Club" started.  I am sharing this with you, because you may know of some leader wanting to start a group in their parish. I share it with you, because ideas for the group belong to the Holy Spirit and the Church. Even if a leader does not use the ideas, the methods of developing a group from scratch can be used in creating a Comprehensive Plan for a youth group, young adult group, or youth ministry. I am going to share it with the DHT Extension, because this group was created using the series "Renew Your Vision". The Dreamers Club is another experiment, showing you that the US Catholic Bishops and the leaders who put together the document "Renewing the Vision", were RIGHT! Members of DHT are excited by these writing, so we wanted to put it in action, helping to interpret the documents at a parish level. This post is just a draft - just my thoughts about how "The Dreamers Club" began, using both the document "Renewing the Vision" and the series "Renew Your Vision". Here is the story...

One cold Saturday afternoon, two brothers, one a volunteer in our Pre-Confirmation program and the other - a Confirmand, asked if they could watch the film "The Karate Kid". I was not interested in watching the film, but from their impression and their explanation of the movie, I decided to put it on. At the end of the film, both of the teens asked if we could see another film again, but this time they wanted to invite other teens their age to participate. This is how the "Dreamers Club" began.

The Dreamers Club started with an interest for film. Not your typical youth group or youth gathering - some groups would have the familiar sports or games for teens to keep them off the street, while other groups had a spiritual bent to it, similar to the Charismatic Renewal or the Cursillo (Jornada). This group could not be all about "getting together to watch a movie", it had to have elements of the Catholic Faith - a Catholic Identity.

Reflecting on that Catholic Identity, I recall the words of our late Holy Father, Pope John Paul II, where he said to the youth and young adults at World Youth Day, "How does Jesus send you? He promises neither sword, nor money, nor any of the things which the means of social communications make attractive to people today. He gives you instead grace and truth. He sends you out with the powerful message of his paschal mystery, with the truth of the cross and resurrection. That is all he gives you, and that is all you need" (Pope John Paul II, World Youth Day 1996).

How does Jesus send us? We have the blessings of God, the Sacraments that strengthen us and our relationship with Jesus, to give a reason to the youth and young adults we serve in our community. The teens who wanted this "film group", also hungered for friendship, community, and for that personal encounter for Christ. They kept coming to the Church, not knowing that God was drawing them to Himself by way of us Catechists and Youth Leaders. He was using us, like He uses the saints, most especially the Patron saint of our Church, Mary. One by one, we discussed with individual youth our ideas for a film group - it inspired them even when we mentioned prayer and friendship. Some did not like the idea, but they tagged along, later becoming members of the group.

The groups target audience were Confirmands, and those who received Confirmation and were in danger of leaving the Church. If you are a Catechist for Confirmation, you know the feeling of disappointment when your students after receiving Confirmation, slowly lose themselves to the world, leaving the Mass and so many other spiritual blessings the Church has to offer. We created a system to reach the youth who received their Confirmation, students who have entered Confirmation, and members of the Altar Servers. In six month the group has grown from 8 to 25. It not only includes former and present Confirmands, it also includes family members who are in 4th, 5th, and 6th grade. In other words, the question "How does Jesus send us?" is being answered by the testimony of the "Dreamers Club" members - they are the ones giving Good News, not about the group, but about the friendship they found in Christ and each other. They are becoming a living testimony of the Gospel, and that "Catholic Identity".

Check out the TABLET NEWS PAPER for an article on the Dreamers Club and Queen of Angels Youth Ministry. 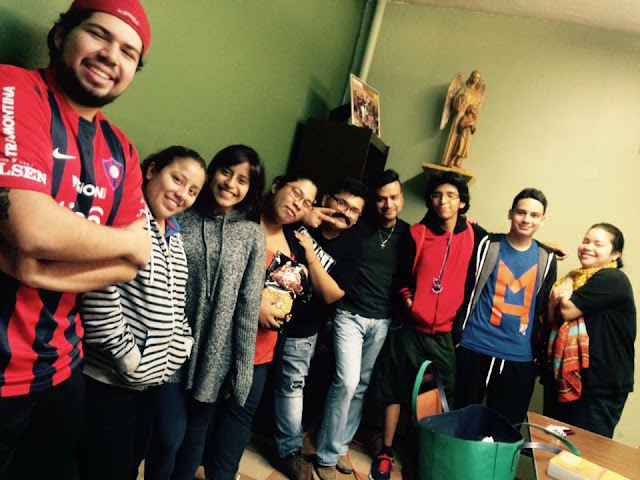 Popular posts from this blog

May the Angels lead you...

By Juan Rodriguez Arthanius July 11, 2020
Queen of Angels has lost one of its beloved, retired Deacon Juan Calvo, who served the community of Sunnyside for many years. Details of the Wake Service, and Funeral Mass will be provided later this week . We thank Deacon Calvo for his dedication and service. Rest in peace. Queen of Angels, pray for you. WAKE SERVICE will be held at... Edward D. Lynch Funeral Home, INC. 43-07 Queens Blvd. Sunnyside, NY 11104 Monday, July 13th at 4PM - 8PM FUNERAL MASS will be held at... Queen of Angels Church 44-04 Skillman Ave Sunnyside, NY 11104 Tuesday, July 14th at 10AM MASS INTENTIONS - Stop by the Rectory Office, Monday - Friday from 9AM to 8PM, Saturday from 10AM to 3PM. You can also contact the Rectory at 718-392-0011
Post a Comment
Read more

By Juan Rodriguez Arthanius June 27, 2020
On Sunday, June 21st, Fr. Dowd announced to the public during Sunday Mass that Msgr Jonas Achacoso will be leaving Queen of Angels Parish for his new assignment as the Pastor of Corpus Christi in Woodside NY . We are proud of this announcement. We wish Msgr. Achacoso our prayers, and support. Msgr. Achacoso wrote to the Parishioners in this weeks Bulletin: "'Swift fly the years' in the words of a poet. At the end of my ministry in Queen of Angels, I thank everyone who has made those years fly so quickly because I was truly having fun as I enjoyed so much kindness, generosity and friendship with the parishioners. I started coming to this parish from the summers of 2007 to 2013. Then I was as part-time parochial vicar from 2014 to 2020. So, it’s a total of 14 years of my life from which I treasure so many happy memories. Queen of Angels and Sunnyside has been and will be a home for me. I ask your prayers as I respond to the call of service to Corpus Christi – Woodside ef
1 comment
Read more

By Juan Rodriguez Arthanius June 27, 2020
Rev. Nestor Martinez! Today, Fr. Dowd attended the Ordination Mass at the St. Joseph's Co-Cathedral, and was told right after the celebration that Rev. Nestor Martinez will assigned to Queen of Angels. We can't wait for you to be a part of our Family, Fr. Nestor Martinez. Count our blessings, support, and prayers. May Queen of Angels, pray for you, your ministry, and your family.  Check out Fr. Nestor's Story on NetNY TV !
Post a Comment
Read more

Q of A Social Media

Q of A Business Network

Q of A Translate Blog